A brighter future? A lecture about biomedicine.

A brighter future? A lecture about biomedicine. 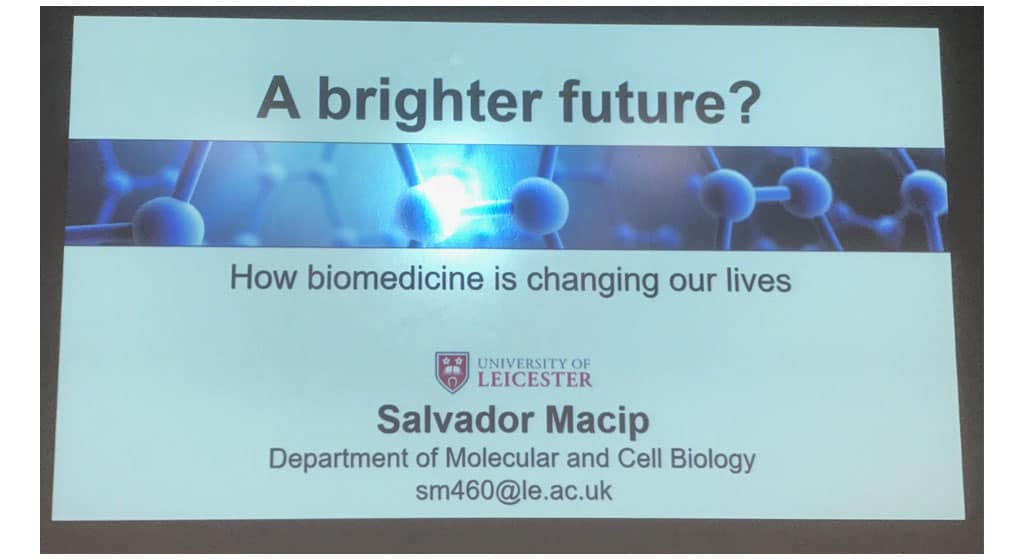 Friday the 26th of April at midday, Salvador Macip – a doctor, researcher and writer currently working at the Leicester University – gave a lecture. In said lecture, closely related to the subject of Sciences of the Contemporary World, or the acronym CMC in Catalan, Macip talked about Biomedicine and how that field of science could help shape a better future.

Salvador Macip, despite being a doctor, works with a team of scientists from every field, such as physicists, veterinarians, chemists and others to research the still very unexplored world of biomedicine and to develop new approaches to daily medical problems, ageing being one of them.

The researcher started the lecture introducing the concept of Biomedicine to the students, saying it involved different fields in science and why it was important that so many types of scientists work together towards the same goal. He later went on to talk about how all living things are made of cells, and these cells all have the same DNA, despite having different functions and/or forms. 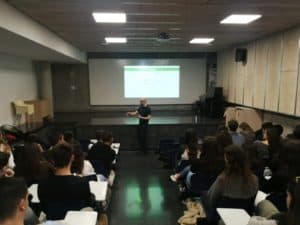 Macip explained the origin and base of biomedicine, by stating that in 1953, Watson and Crick were the first to say DNA was where information was stored. He also talked about the history of medicine, with the origin of biomedicine being the crossing line for a new era of medicine and mankind.

The lecturer then talked about the main goal of Biomedicine; for humans to live longer and better than they do now. He gave examples of projects currently being investigated, explaining the positive and negative aspects of each. The four projects Macip focused on and elaborated were; regenerative medicine, cloning, genetic manipulation and anti-ageing.

Regenerative Medicine, the first topic he discussed, was stem cells. These cells, found in embryos when a child is created, are the base of future specialised cells, the same as blood cells or pancreatic cells. The aim of regenerative medicine is to be able to create any type of cell artificially from one’s body, which could potentially end with artificially created tissues that work as a substitute for organs your body won’t reject, since it comes from your own body. However, there’s an issue with this, and it is that stem cells are difficult to find, mostly in embryos, which you must destroy to get the cells. This has a lot of ethical implications, which is why scientists are trying to find new methods to obtain the cells, such as getting them from the umbilical cord of newborns, or IPS, the process in research where a normal cell is turned into a stem cell.

A topic Salvador Macip mentioned but didn’t go deep into, is cloning. Cloning is a process that creates an individual from another one, both being genetically identical. He briefly explained how there are two different ways to clone an individual: Therapeutic and reproductive cloning. Therapeutic cloning consists of the creation of an embryo from someone’s own DNA, where the resulting cells remain in a dish in a lab. Reproductive cloning uses the same methodology to create said embryo, but once the cell is created it is implanted in a uterus. But cloning isn’t the best option in most cases, since it has a lot of complications, both ethical and legal.

The third topic that was introduced to us was genetic manipulation, which is the idea that pieces of DNA can be cut and replaced, altering the genetic sequence to one’s desires. To give an example of successful and accessible genetic manipulation we were introduced to CRISPR, a process of genetic manipulation made easier, faster and cheaper with the help of a specific enzyme. The implications of this were discussed in the lecture. For one, since the formulation of the idea, in many scientific circles it was seen as potentially dangerous, due to the fact that the DNA in any type of cell could be altered, thus leading to the genetic manipulation of embryos and with them, the creation of genetically altered humans. Because of that potential threat and the ethical rules and implications connected to it, a ban was led by scientists. However, as Macip explained, around 2015 that ban was lifted and scientists began to work on it again. Some years later, a Chinese scientist altered the DNA of two families trying to have children and the result was the birth of the first genetically altered babies, or CRISPR babies, which received a lot of backlash from the scientific community. Macip also mentioned how genetic manipulation might dilute variability in the future or change humanity as we know it. 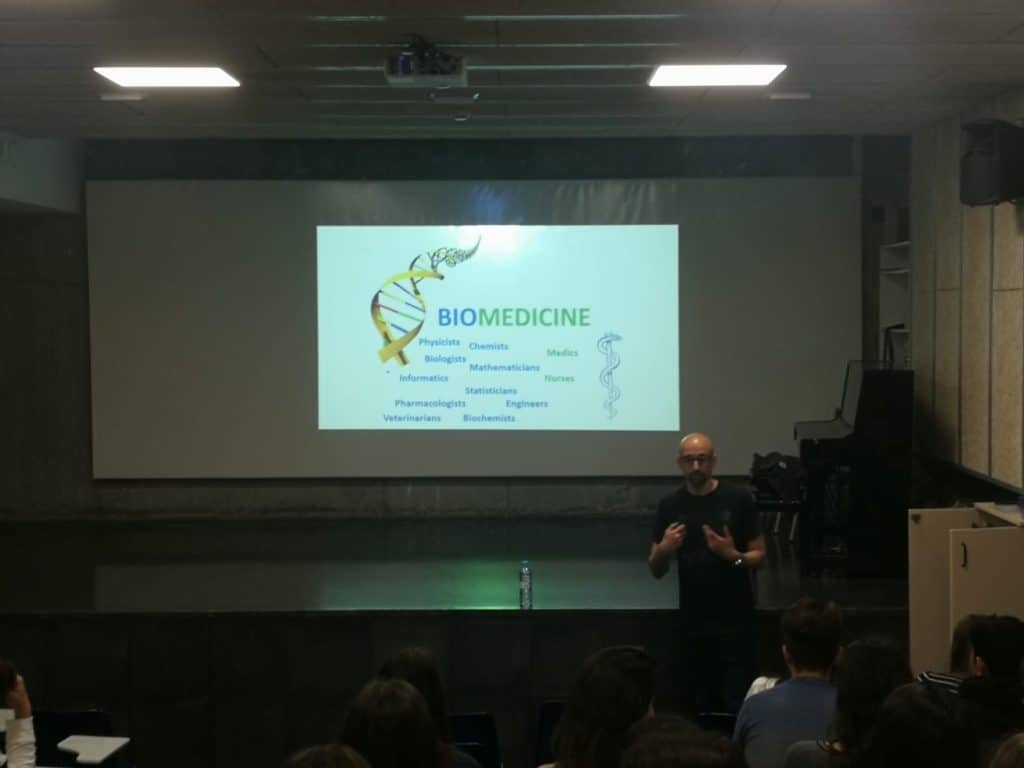 The last topic the lecturer explained was anti-ageing. He explained how aging is a biological process, or rather a series of biological processes that happen naturally to all species. What biomedical scientists are trying to do is treat aging as a disease, and thus use the same methodology they would with any common disease, such as identifying the cause and finding a cure for it. Aging is essentially cellular aging: as we age, there are more and more old and not properly-working cells. What biomedicine is trying to do is try and locate those old cells and eliminate them without damaging the perfectly-working ones. (Nanotechnology)

An example of an experiment they did in Salvador Macip’s lab with old tissue is that they put a specific drug in it and it killed the old cells, while preserving the normal ones. However, while it worked with cell tissue, they weren’t sure if it would with living animals, so they did some experiments, and two of those were explained in the lecture. The first living experiment was done with flies, since they had a short lifespan and were very easy to observe. The same drug was injected in some of them, but not in all the flies, and their lifespan was observed. The flies with the anti-ageing drug had their lifespan increased by 20% , while the non- infected ones survived the average a normal fly would. This experiment showed how the drug could increase the lifespan but is wasn’t clear if they were healthy or not, and since the pretext of anti-ageing is not living longer but better, they decided to perform another experiment. The second experiment consisted of a group of mice, some of them with the drug injected, some without. Just as with the first experiment, the mice showed results of living longer. To see the quality of life, the mice’s memory was checked. The results showed it was better than that of a normal old mouse, which confirmed the hypothesis that the drug not only increased the animals’ lifespan, but also that their health doesn’t decrease. The consequences of anti-ageing were also mentioned, overpopulation and the enhancement of the gap between the rich and poor countries being the most discussed. 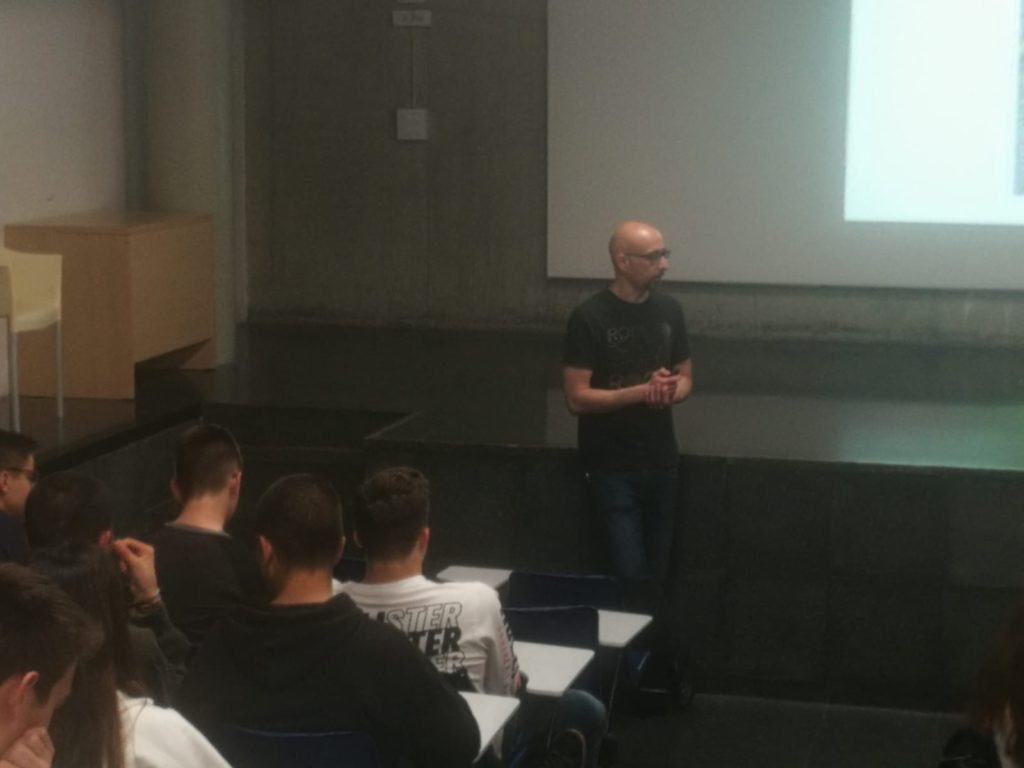 After the explanation, the lecturer saved some time to answer any questions the students had about the lecture or anything related to biomedicine and with that, the lecture was over.